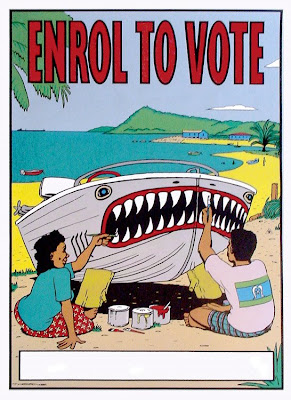 This is one of the last things the political poster collective Redback Graphix produced. It was designed in 1993 as part of a government campaign to involve Indigenous Australians in the democratic process, this poster was specifically for the Torres Strait. On the 14th of March 2009 a book on Redback's prodigious output over several decades was launched at the National Gallery in Canberra. It's good to know that these influential posters are now in the collections of several major galleries.

Thanks for the comment Aldo, I'm good, as you can see I'm still in Tasmania. Doing the occasional commercial for China from here, and generally being a beach bum.