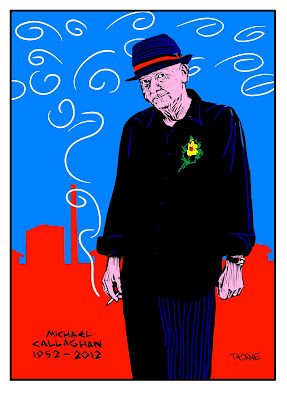 On Saturday I attended the sad occasion of Michael Callaghan's funeral, along with some 200 others at the Exeter Community Hall, close to where he and his partner lived south of Sydney.
There is not the space here to do justice to his body of work but it would be fair to say he changed the political poster in Australia forever with his Redback Graphix designs. As both a scholar and a cynic he knew what mattered and how to make it matter to others. It was this rigour which drove him on through decades of severe illness, still making political images until his last day.
To me he was a landlord, a historian, a client, a mentor, and on one occasion a guy in a coma who I was told only had 24 hours to live. (They were wrong by twenty years). But above all Michael was my thoughtful, generous friend.